Ruba Salih | Nature, Displacement and the Anthropocene in Palestine: A View From the Already Extinct 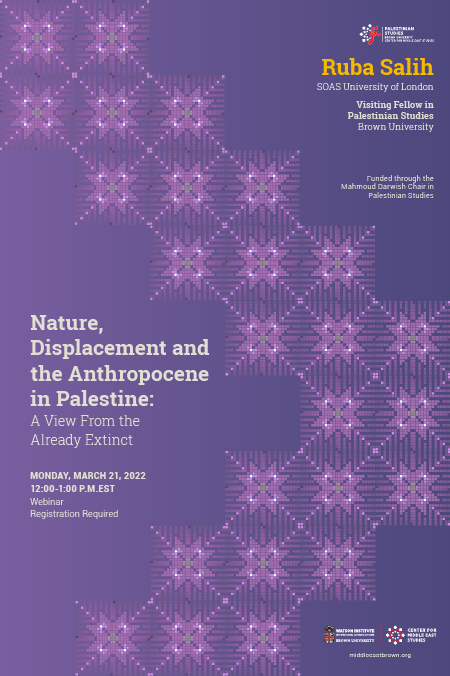 With generous support from the Darwish Chair in Palestinian Studies.

Recent Anthropocene commentaries have argued that as humans have become decisively entangled in natural systems, they became a geological species-agent aware of its own place in the deep history of planetary time. The recognition of the brevity and paucity of human history, coupled with the risk of collective extinction humans face, poses distinctive questions around justice and sovereignty for human and non-human forms of life. On the one hand, it has been argued that the Anthropocene should carry the seeds for a pre-political, ethical consciousness. The latter is essential to pave the way for a progressive construction of a common world, beyond particularistic justice claims. On the other hand, the appreciation of human-nature entanglements has brought to the fore ontological questions about non human-lives’ voice in the political order. In this paper, I approach the debate from the vantage point of the already extinct: Palestinian refugees and their ecologies. The case of Palestine shows that large-scale reordering of nature and the expulsion of indigenous populations are constitutive aspects of settler-colonial formations. Power and intra-human divisions are at the core of how ontological distinctions between “Nature” and the “Human” come into being in the first place. Nature is far from being a universally shared notion. In Palestine, a ‘settler nature’ was imposed and the very boundaries between Life and Nonlife were redrawn, ‘fossilizing’ the indigenous through violent erasure and displacement. Ethnographic material collected among Palestinian refugees shows, however, that the destruction of the indigenous natural and social habitats is unstable as it runs against the unruly and unpredictable work of nature itself, producing novel political claims and visions. In conclusion, it is only by attending to this profoundly unequal access to Life (human and non-human) that a possibility emerges of recognizing the common, global vulnerability the species faces.