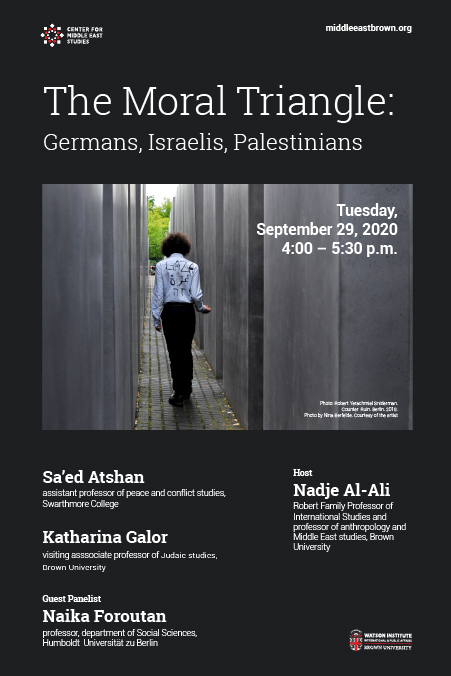 Register here to join the webinar.
Please click on this link to buy the book from the Brown Bookstore. The Bookstore is offering a 10% discount on event books using the code EVENT10.

Mitchell Center Podcast – Episode 1.13: Germans, Israelis, and Palestinians in the Shadow of the Holocaust - Sa'ed Atshan and Katharina Galor

Berlin is home to Europe’s largest Palestinian diaspora community and one of the world’s largest Israeli diaspora communities. Germany’s guilt about the Nazi Holocaust has led to a public disavowal of anti-Semitism and strong support for the Israeli state. Meanwhile, Palestinians in Berlin report experiencing increasing levels of racism and Islamophobia. In The Moral Triangle Sa’ed Atshan and Katharina Galor draw on ethnographic fieldwork and interviews with Israelis, Palestinians, and Germans in Berlin to explore these asymmetric relationships in the context of official German policies, public discourse, and the private sphere. They show how these relationships stem from narratives surrounding moral responsibility, the Holocaust, the Israel/Palestine conflict, and Germany’s recent welcoming of Middle Eastern refugees. They also point to spaces for activism and solidarity among Germans, Israelis, and Palestinians in Berlin that can help foster restorative justice and account for multiple forms of trauma. Highlighting their interlocutors’ experiences, memories, and hopes, Atshan and Galor demonstrate the myriad ways in which migration, trauma, and contemporary state politics are inextricably linked.

Sa’ed Atshan is an assistant professor of peace and conflict studies at Swarthmore College. He will be spending the 2020-2021 academic year as a visiting assistant professor of anthropology and visiting scholar in Middle Eastern studies at UC Berkeley. He previously served as a postdoctoral fellow at the Watson Institute for International Studies at Brown University. He earned a Joint Ph.D. in Anthropology and Middle Eastern Studies and an MA in Social Anthropology from Harvard University, and a Master in Public Policy (MPP) degree from the Harvard Kennedy School.  He received his BA from Swarthmore in 2006.

He has published two books in 2020: Queer Palestine and the Empire of Critique (Stanford University Press) and the co-authored (with Katharina Galor) The Moral Triangle: Germans, Israelis, Palestinians (Duke University Press).

Atshan has been awarded multiple grants and fellowships, including from the Rosa Luxemburg Foundation, Open Society Foundations, National Science Foundation, Social Science Research Council, Woodrow Wilson National Foundation, Andrew Mellon Foundation, and the Jack Kent Cooke Foundation. He is also the recipient of a Paul and Daisy Soros Fellowship and a Kathryn Davis Fellowship for Peace. He has worked for the American Civil Liberties Union, the UN High Commission on Refugees, Human Rights Watch, Seeds of Peace, the Palestinian Negotiations Affairs Department, and the Government of Dubai.  He is also a Palestinian, Quaker, and LGBTQ human rights activist.

Katharina Galor is an art historian and archaeologist specializing in the visual and material culture of Israel-Palestine. She received her B.A., M.A. and Diplôme d’Études Approfondi in Art History and Archaeology from the Université d’Aix-Marseille in France and her Ph.D. in Old World Art and Archaeology from Brown University. In addition to teaching at Brown, she also taught at the Hebrew University and the École biblique et archéologique française in Jerusalem, at Tufts University and at RISD in the US, and most recently at Humboldt University in Berlin, Germany. She has been a fellow at Albright Institute of Archaeological Research in Jerusalem, at the Berlin Antike-Kolleg, the Zentrum Jüdische Studien Berlin-Brandenburg, and at the Chronoi Center of the Einstein Foundation Berlin. She is currently the Visiting Hirschfeld Associate Professor at Brown University with a joint appointment in the Program of Judaic Studies and the Program of Urban Studies. Her publications include The Archaeology of Jerusalem: From the Origins to the Ottomans (co-authored with Hanswulf Bloedhorn; Yale University Press, 2013), Finding Jerusalem: Archaeology Between Science and Ideology (University of California Press, 2017), and, with Sa’ed Atshan, The Moral Triangle: Germans, Israelis, Palestinians (Duke University Press, 2020). She is currently writing Jewish Women: Portraits of Conformity and Agency, a project supported by a grant from the Leo Baeck Institute, Berlin.

Naika Foroutan is a political scientist, professor at the Department of Social Sciences at Humboldt-Universität zu Berlin, director of the Berlin Institute on Integration and Migration Research (BIM), as well as head of the German Center for Integration and Migration (DeZIM). Her research focuses on nation states transforming into countries of immigration and its implications for migration and integration politics. She analyzes norm and value debates, collective identities, hybridizations as well as conflict parameters in plural democracies with a particular focus on Islam and Muslims. Her new book on postmigrant societies has been published recently ("Die postmigrantische Gesellschaft: Ein Versprechen der pluralen Demokratie").

In 2011 she received the Berlin Integration Award for her intervention during the controversial “Sarrazindebatte”. In 2012 she received the Fritz-Behrens Stiftung's Science Prize for excellent research.  Furthermore, she has been awarded with the Höffmann-Science Prize 2016 for intercultural competence.

Nadje Al-Ali joined Brown as the Robert Family Professor of International Studies and professor of anthropology and Middle East studies in 2018, after leaving a long-term position at the Centre for Gender Studies at the School of Oriental and African Studies (SOAS), University of London. On July 1, 2020, she assumed the role of director of Brown University's Center for Middle East Studies. Her main research interests revolve around feminist activism and gendered mobilization, mainly with reference to Iraq, Egypt, Lebanon, Turkey, and the Kurdish political movement. Her publications include Gender, Governance and Islam (Edinburgh University Press, 2018, co-edited with Deniz Kandiyoti and Kathryn Spellman Poots); What kind of Liberation? Women and the Occupation of Iraq (University of California Press, 2009, co-authored with Nicola Pratt); Women and War in the Middle East: Transnational Perspectives (Zed Books, 2009, co-edited with Nicola Pratt); Iraqi Women: Untold Stories from 1948 to the Present (Zed Books, 2007,); and Secularism, Gender and the State in the Middle East (Cambridge University Press, 2000. Her co-edited book with Deborah al-Najjar, titled We are Iraqis: Aesthetics & Politics in a Time of War (Syracuse University Press), won the 2014 Arab-American book prize award for non-fiction.

Professor Al-Ali is on the advisory board of kohl: a journal of body and gender research and has been involved in several feminist organizations and campaigns transnationally.