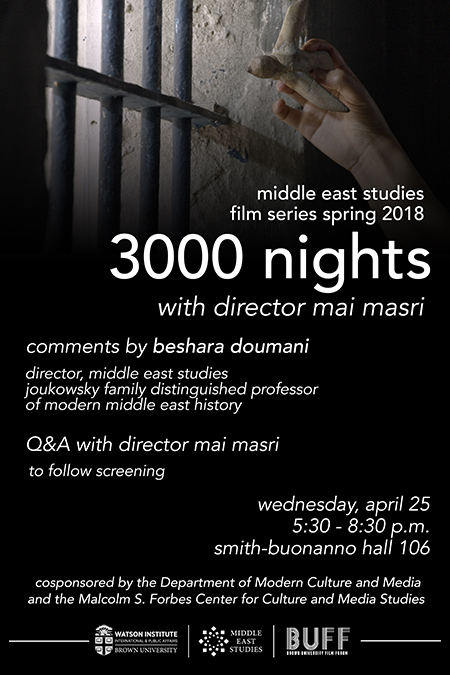 Based on true events and set in the 1980’s, Director Mai Masri's movie "3000 Nights," tells the story of a wrongfully convicted Palestinian schoolteacher who gives birth to her son in an Israeli prison where she fights to protect him, survive, and maintain hope. The film won the Audience Award at Valladolid International Film Festival in Spain and the Jury Award from The Women’s International Film and Television Showcase (The WIFTS).

In collaboration with Brown University Film Forum (BUFF), and co-sponsored by the Department of Modern Culture and Media

Mai Masri is a Palestinian filmmaker who studied film at UC Berkeley and San Francisco State University. She directed and produced several films that have been screened worldwide and won over 80 international awards including the Mipdoc Trailblazer award in Cannes, the Luchino Visconti Award, and the Asia-Pacific Screen Award.

She founded Nour Productions in 1995 with her late husband, filmmaker Jean Chamoun. Her first feature film, 3000 Nights had its world premiere at Toronto International Film Festival and was screened in several international film festivals where it won over 24 awards. It was selected to represent Jordan at the 2017 Oscar Academy Awards for Best Foreign Film and Palestine at the Golden Globe Awards.

Mai has also received international acclaim for her documentaries that have been broadcast on more than 100 television stations worldwide, including BBC, Channel 4 and PBS.