Guy Ben-Porat – Police, Violence and Legitimacy: From Baltimore to Tel-Aviv 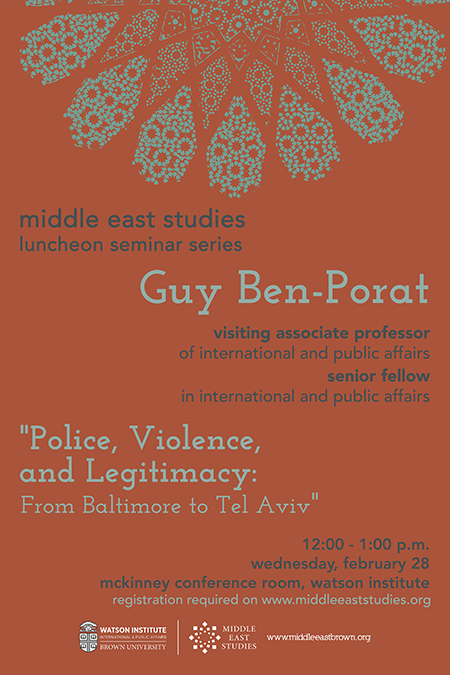 Registration is at capacity. Lunches will be held until the start of the event and thereafter distributed on a first-come, first-served basis to those on standby.

Young people in Tel-Aviv protesting police violence against Israelis of Ethiopian descent, were holding signs saying “Black Lives Matter.” Several months later, and a few miles south, it was Arab residents in Jaffa protesting the police killing of a young man. As the custodians of the state’s monopoly of legitimate violence, Police carry a heavy symbolic load as well as practical importance for citizen’s well-being. Yet, for minority groups the legitimacy of police is questioned.

In this work, through analyzing the experiences of minority groups in Israel, police and policing are embedded in wider questions of citizenship, belonging and legitimacy. While police violence is similar in some aspects, Ben-Porat argues that minority groups’ relation to police and policing involves different histories, concerns and expectations, reflecting hierarchies and exclusions within citizenship regimes.

Guy Ben-Porat is an associate professor at the Department of Politics and Government at Ben-Gurion University (Israel) and an Israel Institute Visiting Scholar at Brown University. He is the author of Global Liberalism, Local Populism; Peace and Conflict in Israel/Palestine and Northern Ireland (Syracuse University Press, 2013) and Between State and Synagogue, the Secularization of Contemporary Israel (Cambridge University Press, 2013).