9th Critical Conversations Panel – Permission to Speak: Boycott and the Politics of Solidarity 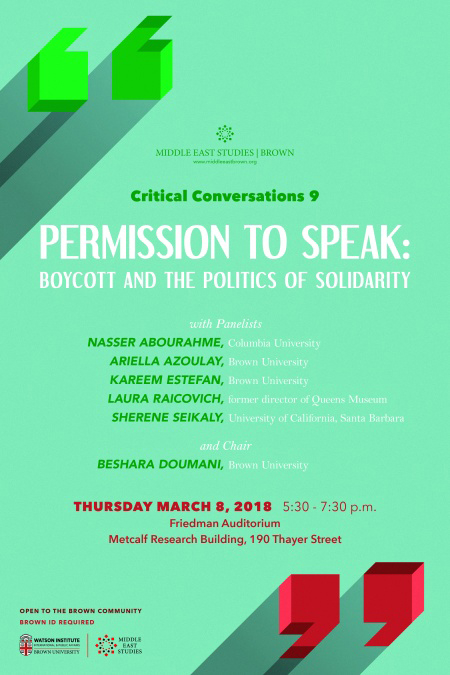 Do boycotts foreclose or open up socially productive conversations about the ethics of cultural and academic production? What are the political possibilities embodied in emerging forms of intersectional solidarity around boycott movements, such as BDS? The panelists take on these and other questions raised in the recently published book, Assuming Boycott: Resistance, Agency, and Cultural Production.

Ariella Azoulay, Professor of Modern Culture and Media and Comparative Literature, Brown University, film essayist and independent curator of archives and exhibitions. Azoulay’s research and forthcoming book focus on potential history of key political concepts-institutions: archives, sovereignties, art, revolutions and human rights. Potential history, a concept and an approach that she has developed over the last decade, has far-reaching implications for the fields of political theory, knowledge formations and visual culture. Her books include: Civil Imagination: The Political Ontology of Photography (Verso, 2012) and The Civil Contract of Photography (Zone Books, 2008). Her first photographic archive Act of State 1967-2007 is part of the Centre Pompidou collection and accessible to researchers.

Nasser Abourahme is a doctoral candidate at Columbia University where he works between colonial studies, political theory and urban studies. He is currently a Mellon Interdisciplinary Fellow at INCITE, the Interdisciplinary Centre for Innovative Theory and Empirics, and the Special Features Editor at the urban studies journal, CITY.

Beshara Doumani is a Professor of History and Director of Middle East Studies at Brown University. His research focuses on groups, places, and time periods marginalized by mainstream scholarship on the early modern and modern Middle East. He also writes on the topics of displacement, academic freedom, politics of knowledge production, and the Palestinian condition. His books include Family Life in the Ottoman Mediterranean: A Social History, Rediscovering Palestine: Merchants and Peasants in Jabal Nablus, 1700-1900, Academic Freedom After September 11 (editor), and Family History in the Middle East: Household, Property and Gender (editor). He is the editor of a book series, New Directions in Palestinian Studies, with the University of California Press.

Kareem Estefan is a PhD student in Modern Culture and Media at Brown University, where he researches artists and filmmakers in Palestine/Israel and Lebanon who engage histories of conflict, displacement, and dispossession through strategies of fabulation, speculation, and opacity. He is co-editor of Assuming Boycott: Resistance, Agency, and Cultural Production (OR Books, 2017), an anthology of essays by artists and scholars on BDS, cultural boycotts, freedom of expression, and transnational activism. His writing has been published in magazines and journals such as Art in America, BOMB, Frieze, Ibraaz, and The New Inquiry, among others.

Laura Raicovich is dedicated to art and artistic production that relies on complexity, poetics, and care to create a more engaged and equitable civic realm. Until recently, she served as President and Executive Director of the Queens Museum where she oversaw an inviting and vital commons for art, ideas, and engagement. In 2018, she will co-curate Mel Chin: All Over the Place (with Manon Slome and No Longer Empty), the first major presentation in New York City of artist Mel Chin in more than 20 years that will occupy the entire Queens Museum and multiple public sites in the city. She is also an editor, with Kareem Estefan and Carin Kuoni, of Assuming Boycott and the author of At the Lightning Field.

Sherene Seikaly is Associate Professor of History at the University of California, Santa Barbara. Seikaly's Men of Capital: Scarcity and Economy in Mandate Palestine (Stanford University Press, 2016) explores how Palestinian capitalists and British colonial officials used economy to shape territory, nationalism, the home, and the body. She is the editor of the Arab Studies Journal, co-founder and co-editor of Jadaliyya e-zine, and an editor of Journal of Palestine Studies.