Peter Green Lecture | Laleh Khalili, Quartermasters of Capital: US Army Corps of Engineers and the Making of Infrastructures in the Arabian Peninsula 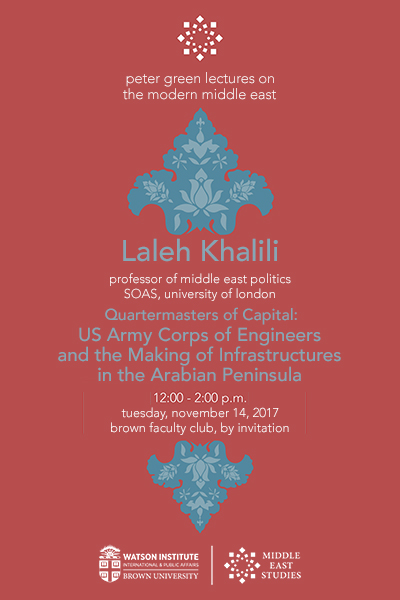 For Brown community.
Registration by invitation.

In this paper, Professor Khalili will be examining two different facets of the entanglements of war-making and capital accumulation in the making of the transport infrastructures of the Arabian Peninsula. The first facet focuses on the corporate structures engaged in commodity extraction and their overlap with domains of sovereign authority, including the exercise of coercive power. She will argue that among the companies that were from very early on involved in the making of maritime transport infrastructure, have been these extractive corporations (of oil and gas, but also other minerals) and among them there have been several distinct models of corporate ownership prevalent in the Arabian Peninsula in the twentieth century.  The two most prevalent models have been those represented by the companies that eventually became ARAMCO and BP (or the latter’s subsidiaries).  What is noteworthy (and profoundly influential in the making of infrastructures) is the extent to which these corporate models have, despite their differences, been engaged in extraction of commodities following well-established colonial models, and have been given not only sovereign authorities by the countries in which they are headquartered, but have had significant operational and strategic overlaps with the militaries of those countries – specifically in the domain of transport and infrastructure construction.

The second facet of the entanglements of war and trade has been the centrality of the labour of workers whose enclosure/expropriation/expulsion from their countries of origin, because of war or shifts in global patterns of trade, has been crucial to the literal forging of these extractive/infrastructural industries.  Here, war and geopolitics are not always the primary drivers for the provision of exploitable, deportable, precarious labour, but in certain periods are crucial factors (other decisive factors are global shifts in the patterns of capital accumulation and the mosaic of politico-economic shifts sometimes labelled as “neoliberalism”).  The mass movement of Palestinians to the Arabian Peninsula in the aftermath of 1948 (and again 1967) was absolutely central to the building of roads, rail, and ports in the region (as well as the construction of offshore facilities). The geopolitics of Israel/Palestine conflict after 1948 was also a notable cause of labour unrest on the docks of the Arabian Peninsula, leading to planning by the British masters of shifts in the sources for labour (from the Arab world to South Asia) in order to avoid such labour and political unrest.

These political shifts ultimately indicate that it is so very often not the logic of the market or the grand vision of great men that shape the transformational landscapes of infrastructures but war, trade, and mass movements of populations of migrants and refugees.

Laleh Khalili is a professor of Middle East Politics at SOAS, the author of Heroes and Martyrs of Palestine: The Politics of National Commemoration (Cambridge 2007), Time in the Shadows: Confinement in Counterinsurgencies (Stanford 2013), the editor of Modern Arab Politics  (Routledge 2008) and co-editor (with Jillian Schwedler) of Policing and Prisons in the Middle East: Formations of Coercion (Hurst/Oxford 2010).  She is currently working on a project on the politics of maritime transport infrastructures in the Arabian Peninsula.