Luncheon Seminar | Starting the Revolution from a Different Place: Art, Dissent and Diplomacy in the Arab World 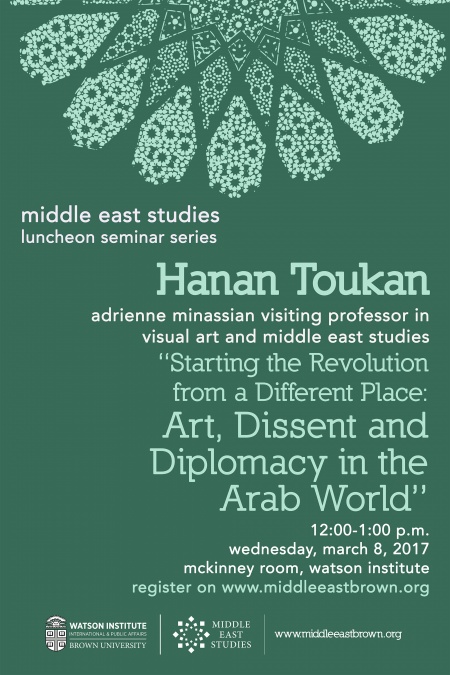 At capacity. Registration on Eventbrite is required. Please click here to register. Lunches for registered guests will be held until 12:00 noon, then released for those on standby.

Abstract: This talk is about the relationship between contemporary art, dissent, cultural diplomacy and cultural politics in the Arab Middle East.  Since the start of the Arab revolutionary process and the violence that has accompanied it, the culture and arts domain has come to play an ever more crucial role as mobilizer, witness and archivist of historical events. As a result the domain has enjoyed an exponential growth in the technical and financial support it receives from US and EU funding bodies. This growth has provoked intense debates within policy circles and a plethora of academic literature on what the role of visual and cultural practices are and should be in violent warfare, political change and the study of politics and culture in the region. The talk will historicize and contextualize this phenomenon as its focus predates 2011 and grapples with it from its first appearance in the 1990s and until its consolidation in the aftermath of 9/11.  Specifically the talk examines the ways in which transnational circuits of visual cultural production are related to how society makes, sees and experiences the political in art and its relevance to the wider publics in Jordan, Lebanon and the Occupied Palestinian Territories. The talk addresses prevalent debates about the nature of the political in art as well as the role of art and the intellectual in political change. It shows that both are part and parcel of shifting structural dynamics in local and international politics that directly impact the production of culture and how different generations practice them, perceive them and process them.  Hence the talk is not is not so much about “art”, as much as it is about the “artworld” from a local perspective, and how culture in it is produced in a global world.  It is equally about some of the centers of power that fund and disseminate visual knowledge about the Middle East.

Bio: Hanan Toukan is Visiting Assistant Professor of History of Art and Architecture and Middle East Studies. Toukan has taught at the Free University of Berlin and at SOAS, University of London in media and film Studies, cultural studies and politics and international studies. She has also guest lectured at Goldsmiths University in art history and visual cultures as well as Campus in Camps in Palestine. She was a EUME postdoctoral Fellow in Berlin in 2012-2013 and a Kenyon Institute Visiting Scholar in East Jerusalem in 2012. Toukan completed her award winning PhD at SOAS in 2012 and she is currently working on her book manuscript “Starting the Revolution from a Different Place: The Arts, Dissent and Diplomacy in Palestine, Lebanon and Jordan" (Stanford University Press). Toukan’s scholarly writings have appeared in Arab Studies Journal, Cultural Politics, Journal for Palestine Studies, Review of Middle East Studies, Jerusalem Quarterly, SCTIW Review, Jadaliyya and Ibraaz amongst others. She has published chapters in Dina Matar and Zahera Harb (eds), Narrating Conflict in the Middle East: Discourse, Image and Communication Practices in Lebanon and Palestine (2013) and in Frederike Pannewick and Georges Khalil (eds), Commitment and Beyond: Locating the Political in Arabic Literature since the 1940s (Wiesbaden:Reichert Verlag) (2015).