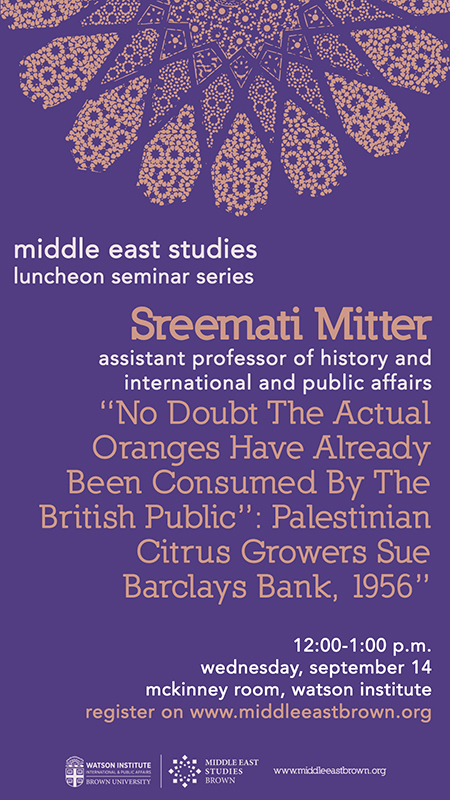 Eventbrite is open for registration as of 4 p.m. August 31, and is required.

Please note: Lunches for registered guests will be held until 12:00 noon, then released for those on standby.

In October 1956, a group of former Palestinian citrus farmers, who had all become refugees in 1948, sued Barclays Bank in a Jordanian court in Jerusalem for £1 million. This amount represented the total value of the citrus crop exported collectively by them in 1947 via the Palestinian Citrus Marketing Board, which was a marketing board set up by the-then Mandatory Government of Palestine to regulate all citrus exports from Palestine.

Since the termination of the Palestine Mandate in 1948, the Palestinian citrus merchants had tried, for eight years, to be paid for their 1947 crop. They had appealed unsuccessfully to the British government, the Jordanian government, the Israeli government, the United Nations Conciliation Committee for Palestine (UNCCP), Barclays Bank in London, as well as to the new Israeli Citrus Marketing Board, which had replaced the Mandate-era institution in Israel. But none of the institutions or governments to which they appealed was willing or able to encash the Palestinian citrus merchants’ cheques, each claiming in turn that the problem was not its responsibility.

This talk will explore this little-known episode in Palestinian history, and use it as a lens through which to understand what happens to an economy when it is disrupted overnight not just by war and violence, but with the abrupt termination of one regime and its replacement by another. What happens to that economy’s institutions? What happens to its currency? What happens to its cheques and bonds and other financial assets which are, essentially, promises to be paid in the future? Most importantly, what happens to the economic lives and assets of the people who have to live through these transitions? How do they fight to defend their assets from expropriation, when they no longer have a state, or a regime, that can protect them?

The talk is drawn from material from Israeli and British archives; from the legal documents pertaining to the case; and from the oral testimony of the survivors of some of the Palestinian citrus merchants involved in the lawsuit.

Sreemati Mitter is the Kutayba Alghanim Assistant Professor of Middle Eastern History and International and Public Affairs at Brown University. She is completing her first book, entitled “A History of Money in Palestine: From the 1900s to the Present.” Her work examines the economic and monetary dimensions of statelessness. Her broader academic interests include the economic, social, and political history of the modern Middle East. Mitter was a postdoctoral research fellow in history at the Institute for Advanced Study in Toulouse (IAST), at the Toulouse School of Economics in Toulouse, France, from 2014-2016. She received her Ph.D. in history from Harvard University’s history department in 2014 and an AM in history from the same department in 2008. She earned a Master’s in Public Policy from the Harvard Kennedy School in 2005, and a BA in Economics from Middlebury College in 1999. She previously worked for the Palestine Investment Fund in Ramallah, Palestinian Territories and at Credit Suisse in New York, for the Energy and Project Finance Group of its Investment Banking Division.