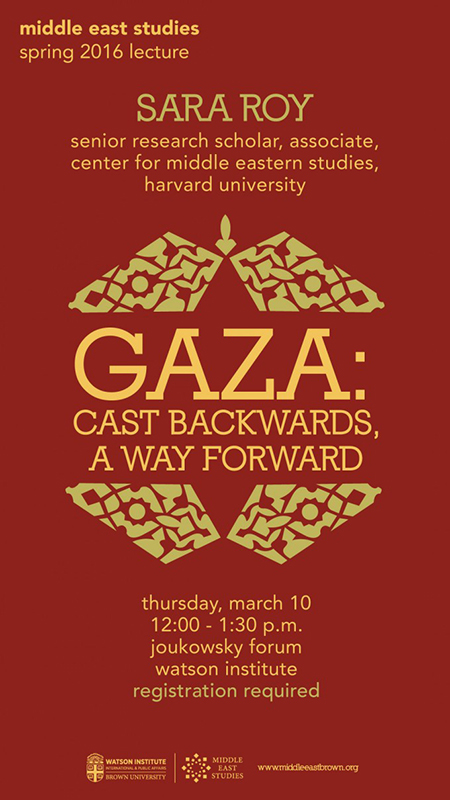 Registration through Eventbrite is required

Lunches for registered guests will be held until 12:00 noon, then released for those on standby.

About Sara Roy:
Dr. Roy began her research in the Gaza Strip and West Bank in 1985 with a focus on the economic, social and political development of the Gaza Strip and on U.S. foreign assistance to the region. Since then she has written extensively on the Palestinian economy, particularly in Gaza, and on Gaza’s de-development, a concept she originated. Dr. Roy is the author of The Gaza Strip: The Political Economy of De-development (Institute for Palestine Studies, 1995, 2001, third edition forthcoming); The Gaza Strip Survey (The West Bank Data Base Project, 1986); Failing Peace: Gaza and the Palestinian-Israeli Conflict (Pluto Press, 2007); and editor, The Economics of Middle East Peace: A Reassessment, Research in Middle East Economics, Volume 3 (Middle East Economic Association and JAI Press, 1999). Her most recent book, Hamas and Civil Society in Gaza: Engaging the Islamist Social Sector (Princeton University Press, 2011), was a winner of a 2012 British-Kuwait Friendship Society Prize in Middle Eastern Studies. It was also chosen one of Choice’s Outstanding Academic Titles and one of the Top 25 Academic Books for 2012. The research for this book was funded by a grant from the John D. and Catherine T. MacArthur Foundation. Dr. Roy also has authored over 100 publications dealing with Palestinian issues and the Israeli-Palestinian conflict and has lectured widely in the United States, Europe, The Middle East, and Australia among other international venues.In addition to her academic work, she serves on the Advisory Council of American Near East Refugee Aid (ANERA), and has served as a consultant to international organizations, the U.S. government, human rights organizations, private voluntary organizations, and private business groups working in the Middle East.

Abstract:
There is simply no precedent for the extraordinarily dangerous situation in which Gaza currently finds itself. With extensive damage to the civilian infrastructure following three wars in six years with the last (in 2014)—Operation Protective Edge—the most devastating, Gaza’s society has been reduced to almost complete aid dependence. Economically, it has been radically leveled, with the virtual destruction of its middle class and the emergence of a broad new class of “poor.” Gaza’s social fabric, already seriously weakened, especially since the hardships imposed by the blockade in 2006—which does not distinguish between civilians and militants—is now characterized by a new kind of frailty and disability. Emigration is increasing, and hope for peace with Israel is being abandoned to a degree never seen before. The lecture shall focus on some of the unprecedented changes and new dynamics that have emerged in Gaza in the wake of Operation Protective Edge and on possible ways of reversing them.