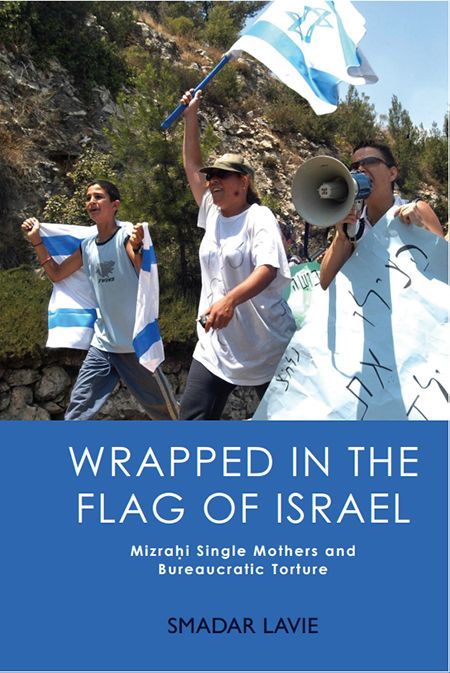 Professor Smadar Lavie’s new book, Wrapped in the Flag of Israel: Mizrahi Single Mothers and Bureaucratic Torture posits a model of state bureaucracy that operates by theological decree. In this system, the categories of religion, gender, and race become the ironclad rubric used to sort citizens into binaries: Jews versus Goyim, rich versus poor, Men versus Women, White versus Black. In so doing, the book explores the relationship between social protest movements in the State of Israel, violence in Gaza, protest movements in the surrounding Islamic World, and the possibility of a nuclear conflict between Israel and Iran.

Wrapped in the Flag of Israel is also an auto-ethnography, detailing Smadar Lavie’s life as a welfare mother and her leadership in Ahoti, Israel’s first Feminist of Color movement. It also exposes the structural apartheid between Jews from the Muslim and Arab World, or Mizrahim ―Israel’s majority citizenry―and the state’s European Jewish ruling minority. Through the lens of the 2003 Single Mothers’ March led by welfare mother Vicky Knafo and the “Tel Aviv-Tahrir” mass demonstrations of 2011, Lavie reveals how bureaucratic entanglements lead directly to pain, or what arguably can be seen as torture. Lavie uncovers the conundrum of loving and staying loyal to a state that uses its bureaucratic system to repeatedly inflict pain on its non-European majority.

Smadaradar Lavie is a scholar in residence at the Beatrice Bain Research Group, UC Berkeley, and a visiting professor at the Institute for Social Science in the 21st Century, University College Cork. She received her doctorate in Anthropology from the University of California at Berkeley and spent nine years as tenured Professor of Anthropology and Critical Theory at the University of California, Davis. She specializes in the Anthropology of Egypt, the State of Israel, and Palestine, with emphasis on issues of race, gender, and religion. She authored The Poetics of Military Occupation (UC Press, 1990), receiving the 1990 Honorable Mention of the Victor Turner Award for Ethnographic Writing. She also co-edited Creativity/Anthropology (Cornell UP, 1993) and Displacement, Diaspora, and Geographies of Identity(Duke UP, 1996). Lavie won the American Studies Association’s 2009 Gloria Anzaldúa Prize for her article, “Staying Put: Crossing the Palestine-Israel Border with Gloria Anzaldúa,” published inAnthropology and Humanism (2011). In 2013, Lavie won the “Heart at East” Honor Plaque for lifetime scholarship and service to Mizraḥi communities in Israel-Palestine