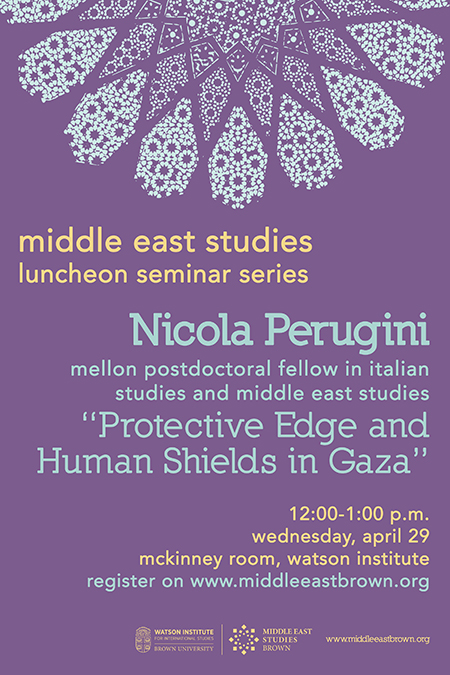 Registration has reached limit and is now closed.

Abstract:
During Israel’s 2014 operation ‘Protective Edge’ in Gaza, human shielding became a central trope in the semiotic warfare surrounding the military campaign. Israel repeatedly claimed that Hamas uses human shields and therefore it is to blame for the killing of hundreds of civilians during the military campaign. Why is human shielding a prominent topic of discussion in relation to Israel/Palestine and almost completely absent when analyzing violence in other countries where warfare extensively involves civilians? What does the legal concept human shield do? And why does the accusation of using human shields apply only to certain actors?

Bio:
Nicola Perugini is an anthropologist and Mellon Postdoctoral Fellow (Cogut Center) who teaches at Brown Middle East Studies and Italian Studies. In 2012-2013 Perugini was a Member at the Institute for Advanced Study (Princeton). His current research focuses on the relationship between human rights and domination in Palestine/Israel, the politics of human shielding and the mobilization of the category of the human in contexts of political violence. He has published articles on law and spatial practices, embedded anthropology, asylum seekers, humanitarianism, politics of the gaze, and trauma and settler colonialism. Perugini collaborates with DAAR (Decolonizing Architecture Art Residency, Beit Sahour, Palestine) and the research project “Forensic Architecture” (Goldsmiths, University of London).