Palestine: Political Cultures and the Cultures of Politics / New Directions in Palestinian Studies 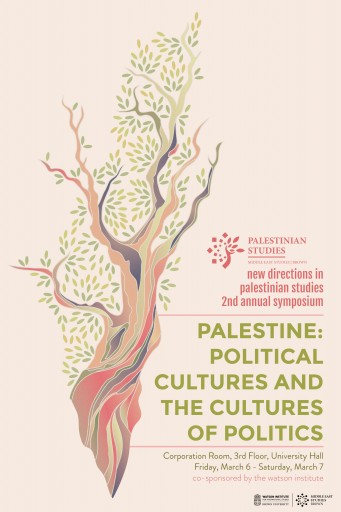 The conference does not cover meals, travel, or accommodations for non-presenters.

Palestine: Political Cultures and the Cultures of Politics
The 2015 symposium seeks to push the “political” beyond its conventional boundaries through both materialist and discursive analyses of political culture and the culture of politics. The process of identifying potential participants for this symposium has revealed an incredible richness of politically informed forms of cultural production, on the one hand; but huge gaps in understanding the political experiences of ordinary Palestinians and how they are mediated, reproduced, and transformed by cultural practices, on the other. The 2015 symposium is our attempt to fill those gaps and to critically explore and crystallize emerging new lines of inquiry and the political spaces they open and foreclose.Click here for a detailed overview of the 2015 program.

About New Directions in Palestinian Studies:

Over the past two decades, the field of Palestine and Palestinian studies has grown quantitatively and qualitatively, with new lines of inquiry pushing in several new directions simultaneously. New Directions in Palestinian Studies (NDPS) seeks to take stock of and critically explore and crystallize these emerging new lines of inquiry and the political spaces they open and foreclose.

This event is cosponsored by the Watson Institute.