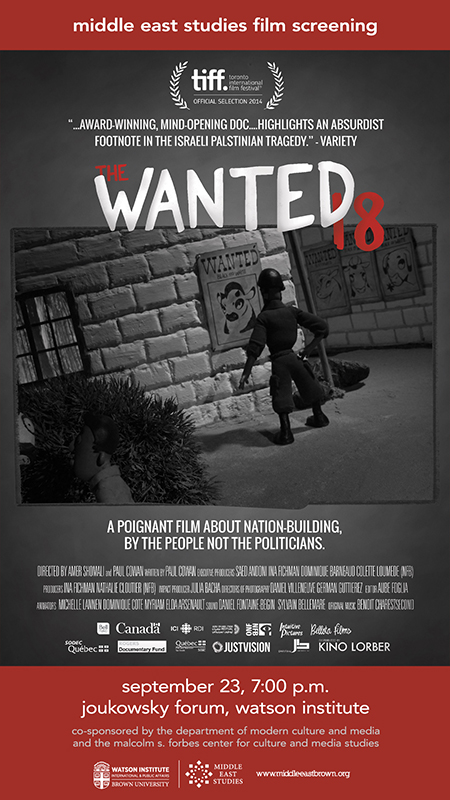 Eventbrite will open for registration closer to the date and is required. Please stay tuned.

Please note: Lunches for registered guests will be held until 12:00 noon, then released for those on standby.

Click here for webcast of Amer Shomali’s  introduction via Skype.

Middle East Studies film presented by Nicola Perugini, Mellon Postdoctoral Fellow in Italian Studies and Middle East Studies. Click here for somerecent news about the film director, Amer Shomali. The film has been submitted as the Palestinian entry to the Oscars.

Film Synopsis:
Humorous and thought-provoking, The Wanted 18 shows the power of mass mobilization and nonviolent resistance to the Israeli occupation during the First Intifada. The film tells the story of 18 dairy cows being brought to the West Bank town of Beit Sahour, as part of a self-sufficiency movement, which were then declared a threat to the security of the state of Israel. Using stop-motion animation, archival footage, interviews, and graphic novel cartoons, the film uses humor to get at a serious subject. This is a poignant film about nation-building from the bottom up, by the people not the politicians. Variety called the film ‘mind-opening’ & ‘ingenious.’

Amer Shomali uses fine art, digital media and technology as sociopolitical tools for change. After studying at the Van Art School in Canada, he completed an MFA in Animation at Bournemouth, UK. One of the founders of Zan Studios in Ramallah, Amer works as an animator and illustrator of children’s books, posters, and multimedia productions. His work has been exhibited in galleries across the Middle East and Europe. Amer’s short film “Dying of the Light” was screened in the UK, Belgium, Lebanon, and Palestine. He was also co-director and animator of “Animated Concerns”, the animated TV series, in Palestine from 2006-2007.

Just Vision is partnering with Kino Lorber, Intuitive Pictures and the National Film Board of Canada to bring The Wanted 18 to communities across the U.S.