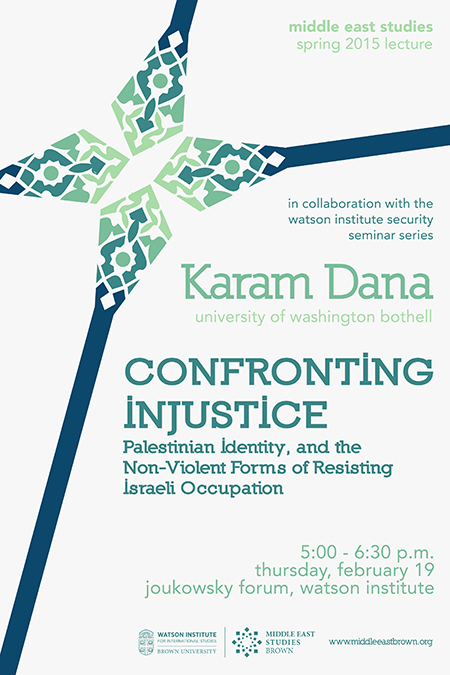 In collaboration with the Watson Institute Security Seminar Series.

An exploration of Palestinian public opinion and attitudes in relation to a variety of social, economic, and political issues. A survey was conducted in the summer of 2013 in an attempt to assess the extent to which the Israelis occupation affects the lives of Palestinians in the West Bank (Sample, N=832 responses), and how specifically Palestinians are being affected. This study includes questions related to the local economy and jobs, education, social structure and its transformations, gender and the changing roles, political future and full statehood. In addition, the respondents were asked a variety of questions to measure how they feel with regards to the practices of the Palestinian Authority, the Hamas/Fatah divide and its socio-economic and political ramifications, the approval ratings of key figures in Palestinian politics, the US role in the peace process, the Boycott Divestment and Sanctions movement, the overall conditions in the Palestinian Territories, and the future of the Palestinian-Israeli conflict.

Dr. Karam Dana is a Palestinian-American academic. He is Assistant Professor of Middle East and Islamic Studies at the University of Washington Bothell. Prior to joining the faculty of the University of Washington, he was on the faculty of Harvard University and Tufts University. His research explores elite politics in Palestinian society in the 1920s and 1930s, contemporary Palestinian public opinion, transnational Palestine, and karamstudies how religious identity and religiosity inform political identities and participation in the larger Arab Middle East. Dr. Dana is the co-principal investigator of the Muslim American Public Opinion Survey (MAPOS), and the Arab American Public Opinion Survey (AAPOS). Dana is the Director of the Middle East Public Opinion Project (MEPOP) and the Director of the American Muslim Research Initiative (AMRI). Both centers are housed at the University of Washington Bothell.