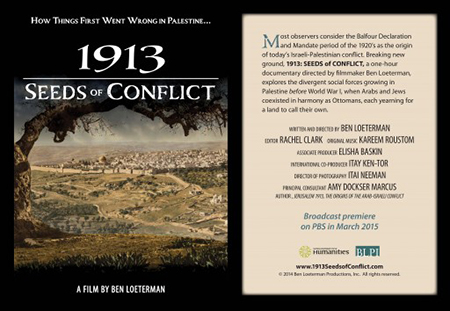 The documentary film,”1913: Seeds of Conflict,” explores the divergent social forces growing in Palestine before the start of World War I. It features Beshara Doumani, director of Middle East Studies.

The screening will be followed by a Q&A with Ben Loeterman and Beshara Doumani.

This event is co-sponsored by the History Department and MCM.

Most observers consider the Balfour Declaration and Mandate period of the 1920s as the origin of today’s Israeli-Palestinian conflict. Breaking new ground, 1913: SEEDS OF CONFLICT, a one-hour documentary directed by filmmaker Ben Loeterman, explores the divergent social forces growing in Palestine before World War I, when Arabs and Jews co-existed in harmony as Ottomans, each yearning for a land to call their own.

Ben Loeterman is an award-winning writer, director and producer of current affairs andhistorical documentaries, often with an emphasis on social justice. After a 12-city screening tour, his independent film The People v. Leo Frank was broadcast nationally on PBS and received extraordinary reviews from the New York Times, Los Angeles Times, and Washington Post. Before that, his work appeared on the first eighteen seasons of the PBS series FRONTLINE and three seasons of AMERICAN EXPERIENCE (Golden Gate Bridge, Public Enemy #1, Rescue at Sea). In addition, Loeterman produced episodes of the PBS series The War that Made America and The Prize, based on Daniel Yergin’s Pulitzer Prize-winning book about the oil industry; God Fights Back, for the PBS/BBC series People’s Century; and an adventure film in Iryan Jaya for the Discovery Channel. His most recent film, John Portman: A Life in Building, appeared at architecture film festivals in Rotterdam, Tribeca, Toronto and Singapore and on public television.

For more information, visit the official website of the film.