The One State Condition 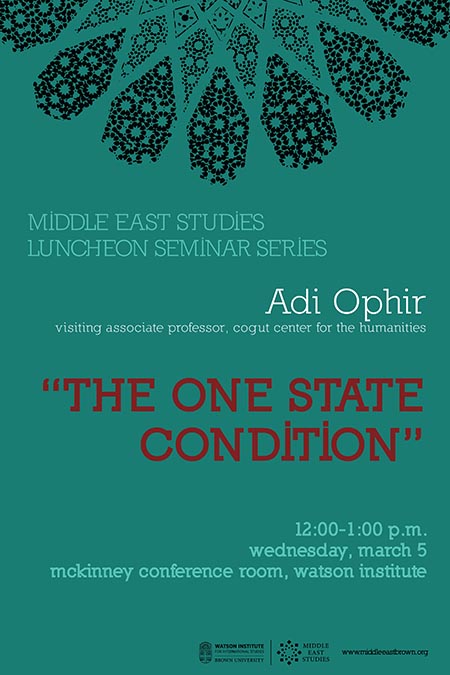 The Israeli regime is often described as a democracy with a certain lingering problem, i.e., "the Occupation." "Ending of the Occupation," it is often argued, would ensure Israel's future as both Jewish and democratic. But the occupation is not simply a temporary state of affairs but rather a systemic condition in which for almost half century about third of the governed population is ruled by the Israeli state as non-citizens subjects. On the basis of a theoretical distinction between technologies of government and state projects, and a historical distinction among the major projects of the Israeli State, I will argue that in this sense, as a systemic condition, the occupation has played a crucial function in reconciling the conflicting tendencies of three major State projects: colonization, creating and marinating a Jewish majority, and liberalization. The lasting occupation has resolved inherent tensions and contradictions between liberalization and colonization, on the one hand, and between colonization and the goal of achieving and maintaining a Jewish majority, on the other hand. I will explain why the very structure of the Israeli regime requires the continuation of those three State projects. From this it follows that the inclusive exclusion of the Palestinian non-citizens has contributed to the unusual resilience of this regime, sustaining half a century of ongoing pressure, from within and without, for either a re-partition of the Land or for a full annexation of the Occupied Territories.

This argument focuses on and expands a point made in The One State Condition (Stanford 2013), co-authored with Ariella Azoulay.

Adi Ophir is a Mellon Visiting Professor in the Humanities at Brown University, director of the Lexicon for Political Theory research project at The Minerva Humanities Center, and professor at The Cohn Institute for the History and Philosophy of Science and Ideas at Tel Aviv University. In 1990 He was the founding editor of Theory and Criticism, the main Hebrew journal for critical theory; since 2008 he directs the Lexicon Project and is the editor of Mafte'akh: Lexical Review for Political Thought. Among his recent books The Order of Evils (Zone Books, 2005); The One State Condition, co-authored with Ariella Azoulay (Stanford 2012), and Divine Violence: Two Essays on God and Disaster The Van Leer Jerusalem Institute 2013). Ophir is also the editor, together with Michal Givoni and Sari Hanafi, of The Power of Inclusive Exclusion: Israeli Rule in the Occupied Territories (Zone Books, 2009).