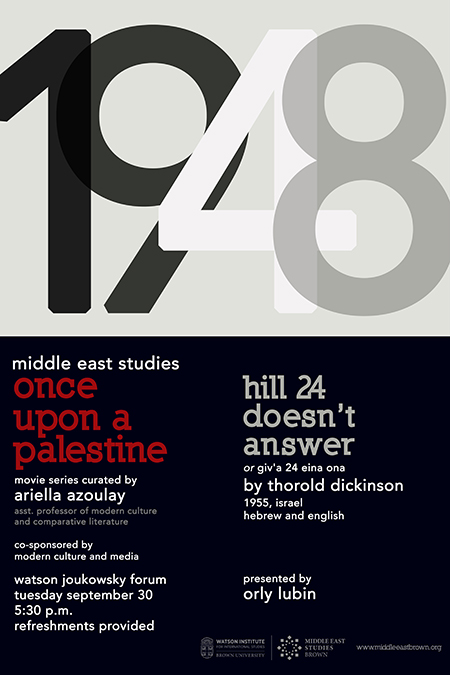 Hill 24 Doesn’t Answer (Thorold Dickinson, 1955) is one of the very few Israeli films about the 1948 war. It consists of three personal stories, told on the way to capture the strategically crucial Hill 24 so as to make sure the UN includes it within the new state’s borders. The film opens with the dead bodies of the four fighters: one woman, a Yemenite, who does not tell her own story of volunteering; the Irish James Finnegan, previously a cop with the British mandate who fell in love with an Arab-Jew woman fighter; The American  Allan Goodman, a tourist wounded in Jerusalem under the Jordanian siege, who fell in love with the volunteering nurse; and David Airam, the only Sabra, who captured an Egyptian soldier who turned out to be a Nazi officer. With “imported” director and cinematographer (Gerald Gibbs) who made a visible effort to navigate an all-Israeli lavishly budgeted production, it nevertheless ended up as national propaganda, highlighting dedication, sacrifice, and especially the variety of justifications of the foundation of a Jewish state for the Jewish victims.

This event is part of "1948 - Once Upon a Palestine", a film series curated by Ariella Azoulay, Assistant Professor of Comparative Literature and Modern Culture.

Orly Lubin is an associate professor at Tel Aviv University, specializing in cultural studies focusing on feminist and poststructuralist theories. She published on literature, cinema, theatre, and visual culture. Her book, Women Reading Women (Hebrew; Haifa University Press, 2003) offers a feminist theory of reading/spectatorship. She is currently working on a book on ethics and the gaze in literature and in visual culture.