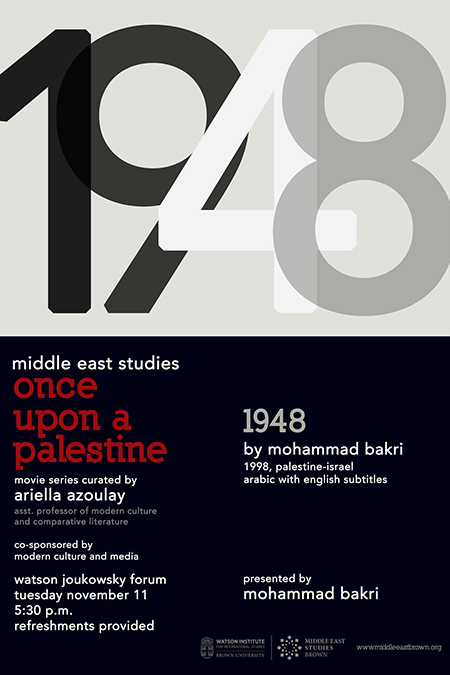 Click here to watch the director's opening and Q&A.

This event is part of  "1948 - Once Upon a Palestine", a film series curated by Ariella Azoulay, Assistant Professor of Comparative Literature and Modern Culture.

Mohammad Bakri is a distinguished Palestinian actor and film director. He is one of the greatest actors in Israel/Palestine, and has performed in both Israeli and Palestinian theatres (Habima, in Tel Aviv, the Haifa Theatre, and al-Kasaba theatre in Ramallah). Among his one-man shows (in Hebrew and in Arabic) are: "The Pessoptimist," "The Anchor” and "Abu Marmar.” He has participated in numerous Palestinian, Israeli and International films. Among the films he has directed are "1948" (Palestine/Israel, 1998), "Jenin, Jenin" (Palestine 2002), which was a subject of a lawsuit, "Since You Left" (Israel 2004) and "Zahra" (Palestine 2009).

The film “1948" is a beautiful, moving collage of voices and stories about the destruction of Palestine in 1948 and the expulsion of the Palestinians. It brings together the voices of singers, mourners, poets, actors, storytellers, residents, historians, and publicists, including Bakri himself, playing the Pessioptimist. Each of them tries to make sense of the great disaster, the Nakba. Among the interviewers there are also several Jews who took active part in expelling the Palestinians. Their role in the film is not to “balance” the Palestinian narrative by introducing a Jewish one, but rather to add their voice to the collage of testimonies and mourning, and to acknowledge the catastrophe, by which they are still haunted, and their role in its production. Along the movie, poems by the Palestinian resistance poet Mahmous Darwish, are sung by Bakri’s daughter Yaffa. The music was created and performed by “Sabrine,” a Palestinian group.

Since its production in 1999, the movie has been inaccessible. It is a special opportunity to watch this unique and moving film in the presence of the director.